My hill repeats on Saturday were perfectly located to allow me a quick nap at the top just before my final descent and then a cold river to jump into to prevent my legs from seizing up.

On my last trip up it was very quiet at the top so I was able to lay down and stare at the clouds and enjoy the quiet and wonder at my stubbornness to do such crazy training. My normal hill repeat location is adjacent to an off leash dog park so laying down is asking for doggy kisses and slobber. This hill was much more remote and I took advantage of it. Too bad it is not closer to home so I can do it more often.

The day was so hot that my water was easily gone before I was done, even though most of the hill is in the trees. But the cold mountain water was very refreshing to jump into and sit for ten minutes.

But after 45 minutes in the car on the way home I was still pretty stiff getting out of the car even with the ice cold river water to soak in.

Not everyone can have these perfect hills in their backyard but I wouldn’t mind one.

Once-a-year soccer and long distance running don’t mix. My hips are aching from the sprints and side to side from the soccer game on Saturday. It was the coaches game against the 14-17 year olds in our community soccer league.

Needless to say the kids are in much better soccer shape than us coaches and they beat us quite handily. And Sunday morning I could barely get out of bed. It didn’t help that I did a big hill workout too on Saturday and was expecting to ache but I knew which muscles those would be. The soccer muscles don’t rear their ugly head with just running. But they definitely told me they were being neglected.

And because I don’t wear soccer cleats more than once per year, of course a blister started to develop which was aggravated during my run later.

I even skipped my Sunday run to recover. I haven’t done that in a very long time.

I was reminded that just being in running shape doesn’t mean you are in shape enough to play a serious game of soccer.

Kudos to all those soccer players out there that play a hard 90 minutes game after game. 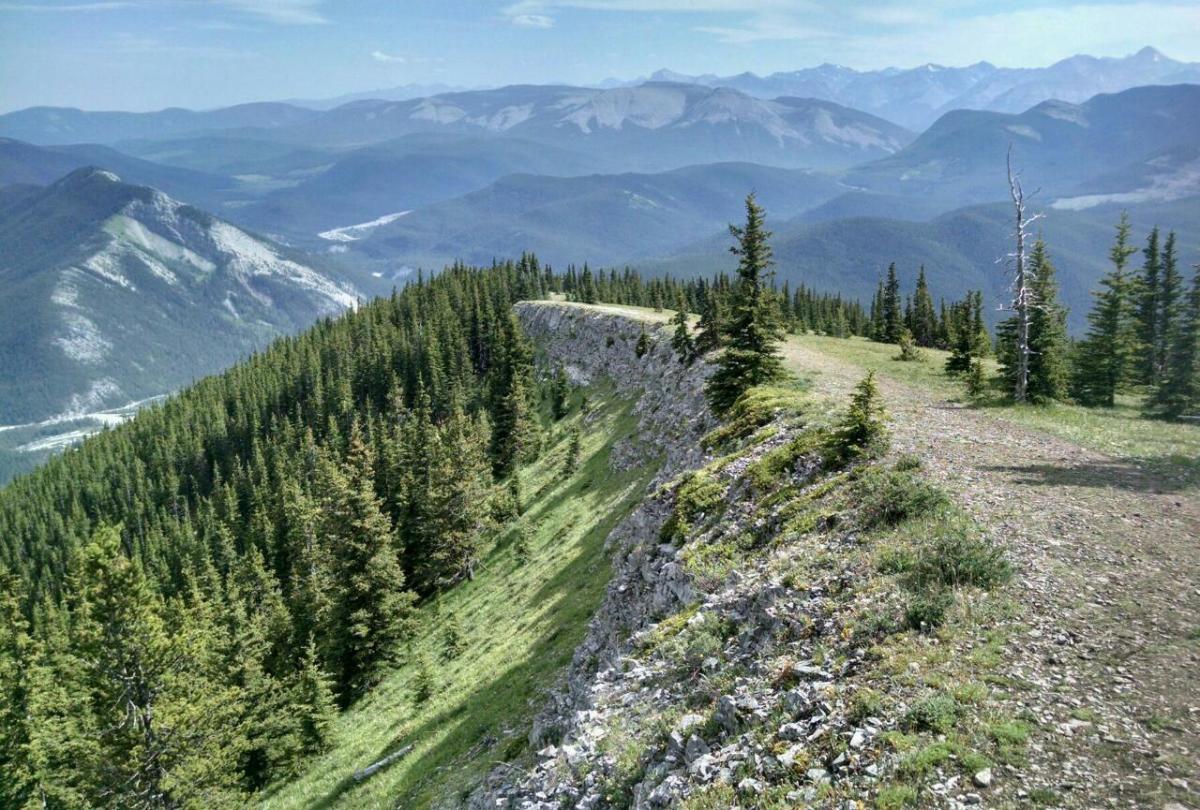 Prairie Mountain is one tough climb but the view is amazing at the top. There is about 700m vertical in 3.5 km (20% average) with lots of roots and rocks. I have no idea where “prairie” came from except that it is so high you can see the flat prairies to the east.

The top has a 360 degree view where you can see the Rockies in one direction and prairies on the other. Standing up there I was inspired to also climb the nearby Moose Mountain, Cox Ridge and Powderface Ridge (but on another day). And on clear days you can make out Calgary surrounded by fields and pastures.

It is a popular climb for locals, especially for anyone doing hill training for trail races. Great for technical terrain training too due to the roots and rocks.

It gets relatively busy on the weekends unless you can finish before 10am. A round trip for me was under 1.5 hours. This was with a hard hike up and with a moderate running pace down. 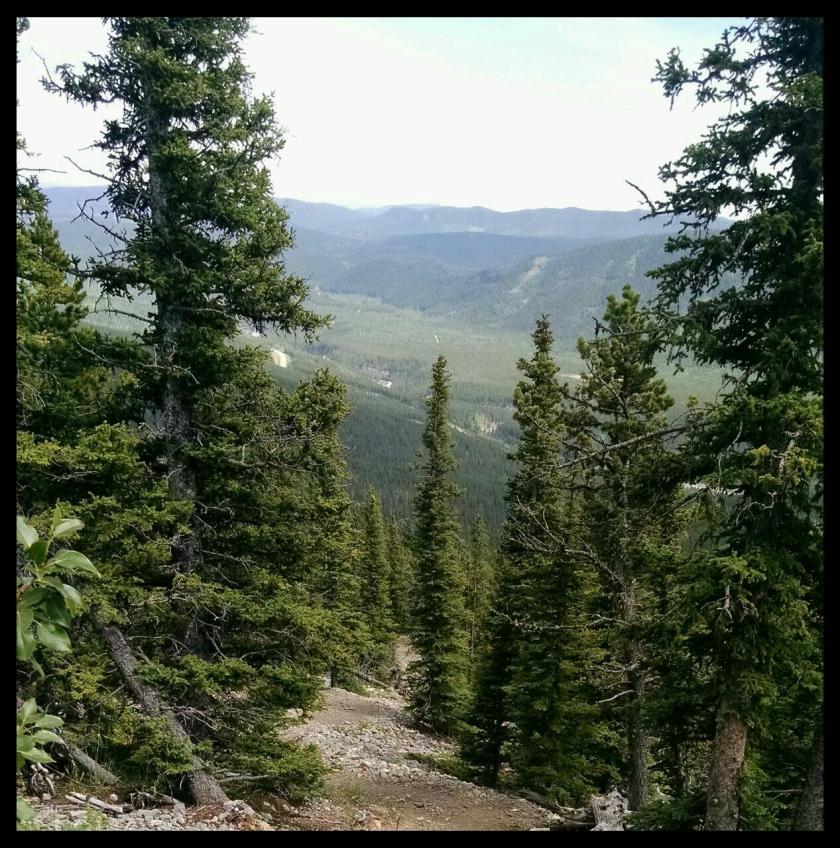 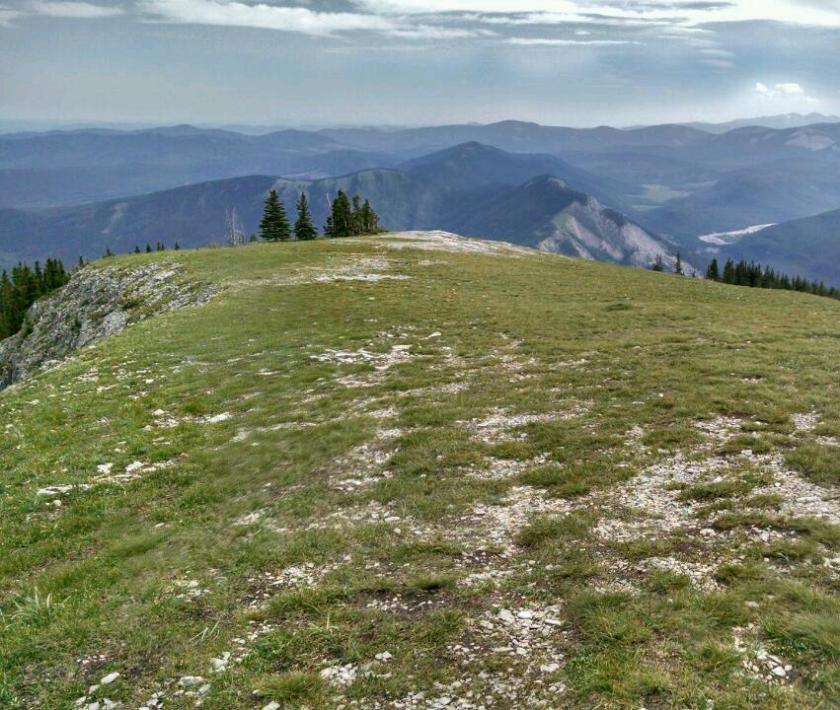 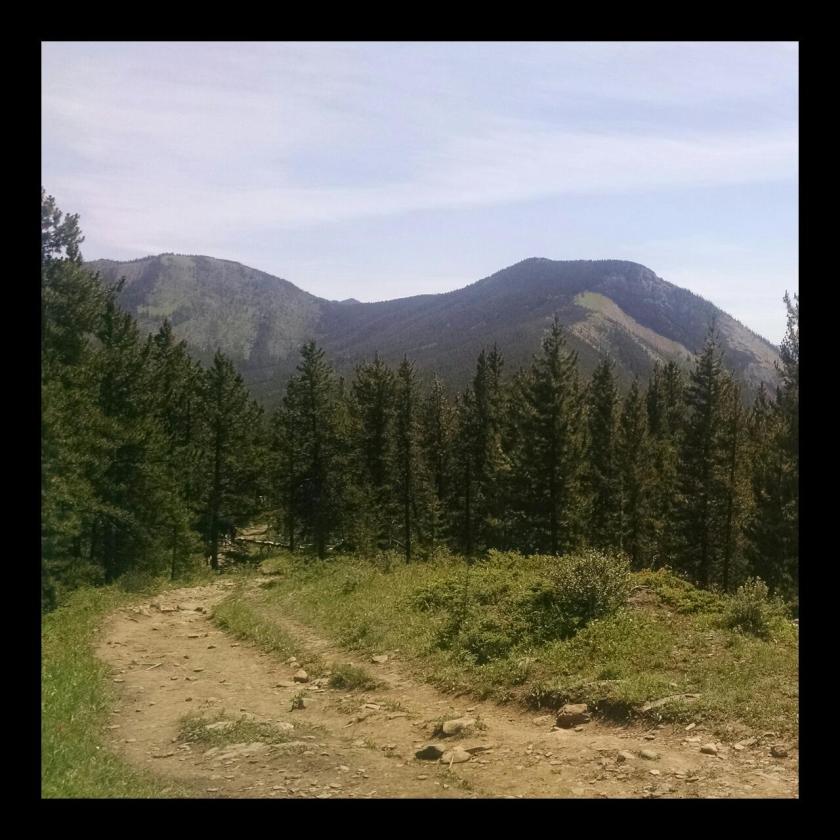 Only 45 minutes from Calgary this area is a mecca for trail runners.

I ran a new route on Saturday which was along a lonely rural road that was the access road to the provincial prison. The frontage of the prison is about 2km long and I couldn’t help thinking I was on video the whole time even though I couldn’t see the cameras or the actual security personnel.

When you are on video you can’t stop for a walk or pee break because you know they are watching you close and trying to figure you out. Why would I be running 10 km from any town along a gravel road. And then an hour later I doubled back as I ran back to my car. I was worried they thought I was scouting out the place. Any way, it was a good excuse to just keep going and not stop for a walk break. Maybe they were analyzing my gait, or laughing at my pained expressions. I was probably the most entertaining thing they had seen all day.

Maybe I will choose a different route next weekend.

It appears I run differently when people are watching.

Anyway here are the pictures of the approaching storm that chased me all the way back to my car. It caught with about 3 km to go and I got quite wet.

Swirling clouds threatening rain didn’t put an end to my run today. I did get wet, very wet. But half an hour out of two and a half when I thought I might have to do stairs indoors isn’t so bad.

I ran hill repeats at Glenbow Ranch provincial park. It is mostly a flat linear park along the river. But the parking is at the top of the valley so you need to go down some steep trails about 50m vertical to the bottom. I used this elevation change for my hill repeats on the various trails.

It actually is a very interesting park. It is only a few years old and best explored on bike due to its extensive length and well groomed trails. It is still part of an active ranch. For example I was passed by two cowboys on horses today. I had to keep ahead of them for a bit on the narrow trail. At least they were not driving any cattle. That would have been awkward on the trail.

The park has a whole bunch of old barns, fences and other signs of the ranching history of the area.

All types of trails for all types of runners – paved, gravel, grass, and dirt (mud today during the rain)

And the views of the Rocky mountains are usually amazing when it is clear enough. It wasn’t quite clear enough today but the valley was still stunning. 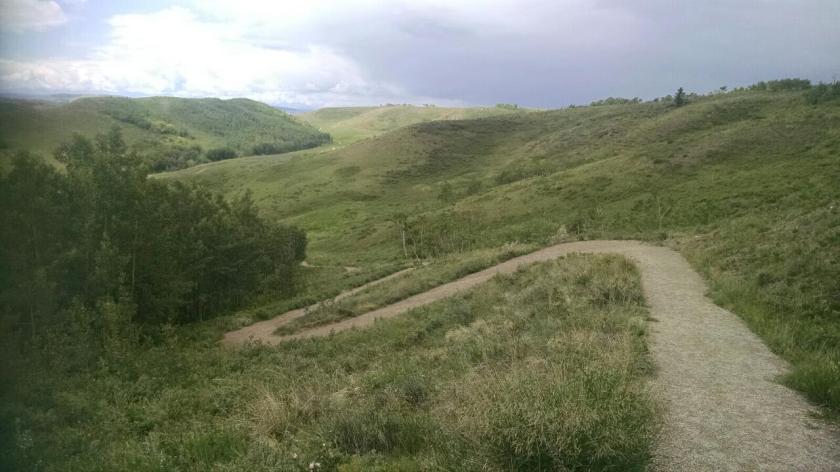 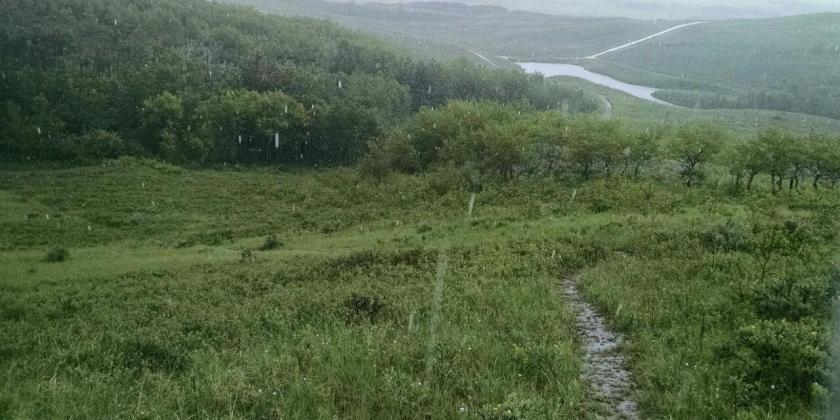 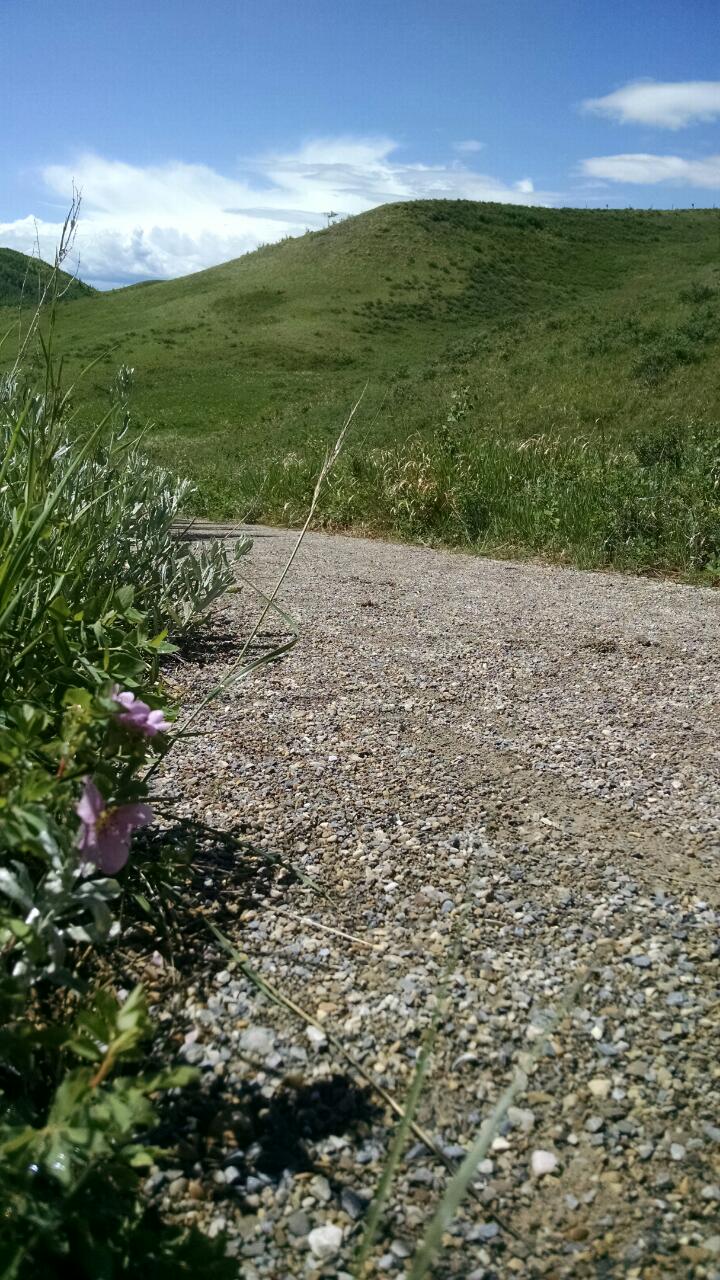 Lucky to be living here. Inspired for the rest of the day, I hope. 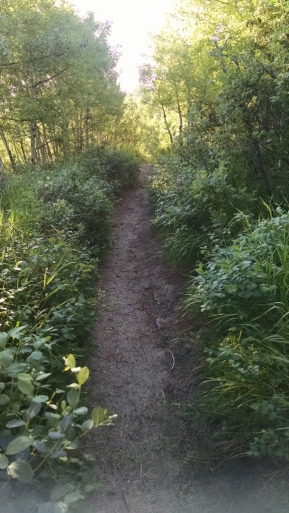 I love a work place where you can wear your running shoes all day and no one even looks twice or comments on it. Everyone here knows I might jump up at any time and go for a run at lunch, late lunch, coffee break, or just run home.

My most comfortable shoes are running shoes. Why not wear them as much as possible? Why not keep my feet inspired all day to run?

Thinking about it, I don’t have many shoes that are not running shoes. Hmm, maybe I should diversify my footwear. But no, I have enough shoes already. I don’t need more (unless it is another pair of runners). 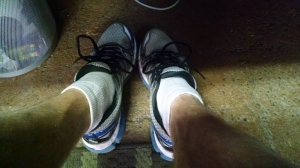 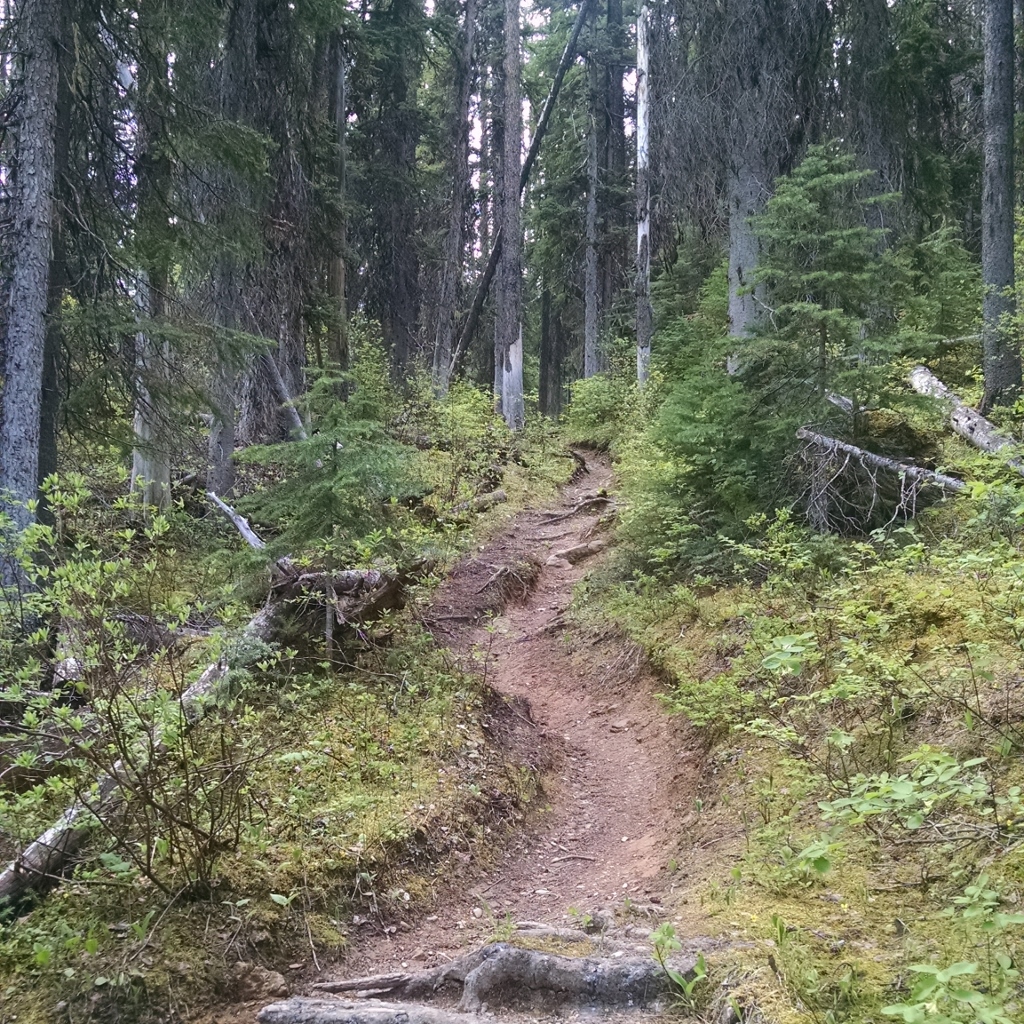 Trails I run – Calgary, Kananaskis, Canmore, Banff, and everywhere between.

Collage of my trail running from late Winter to late Spring. 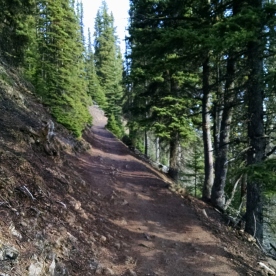 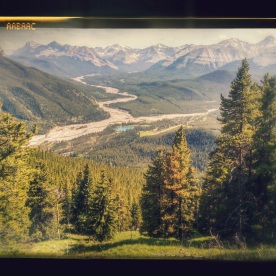 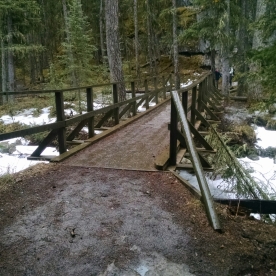 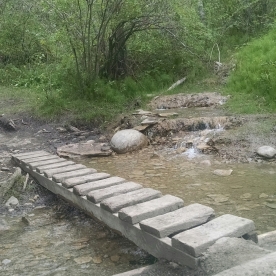 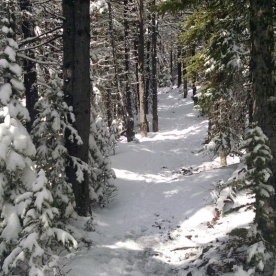 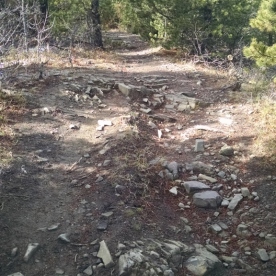 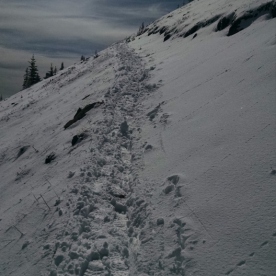 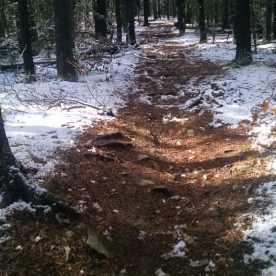 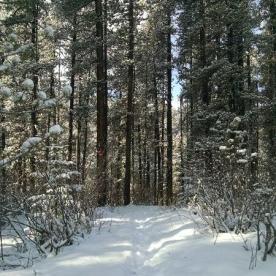 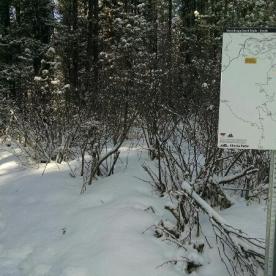 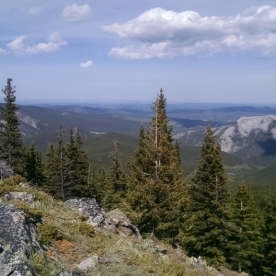 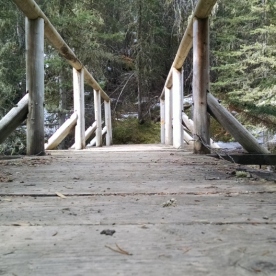 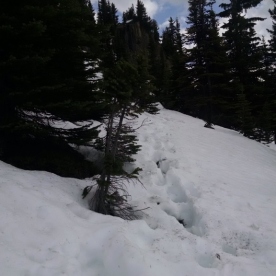 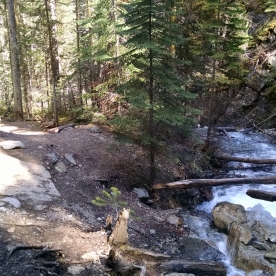 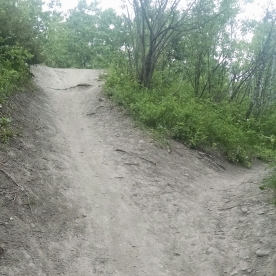 Paskapoo Slopes, also known as COP Eastlands, is several hundred acres of undeveloped land that is surrounded by residential development in Calgary. One way local residents are protesting the rezoning and development of this land is to actually use it as a park instead of letting it sit. Runners and mountain bikers are flocking to this area to maximize use of the land before construction starts up again this summer. 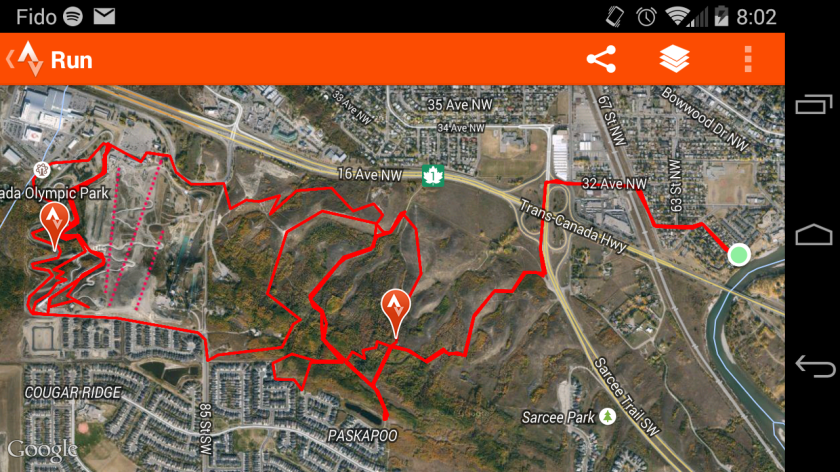 I have run here a lot in the last few years. It is just out my door and has excellent unimproved trails. There are no official bridges for the many creek crossings, just wooden planks and boards and rocks to mostly keep from getting wet. Rugged.

To ensure that much of this land is saved for park instead of box stores and suburban development, it must get used.

On Sunday I ran 22km of amazing trails. Lots of hills, lots of trees, lots of viewpoints, very accessible. There are many ways to get the 100m vertical from bottom to top. Perfect for hill repeats or just winding up and down the trails.

Last summer there was a moose living here which I came across one day. It was a heart pounding few minutes until he let us past. But I am not sure he is still here, probably moving on with all the neighboring construction. 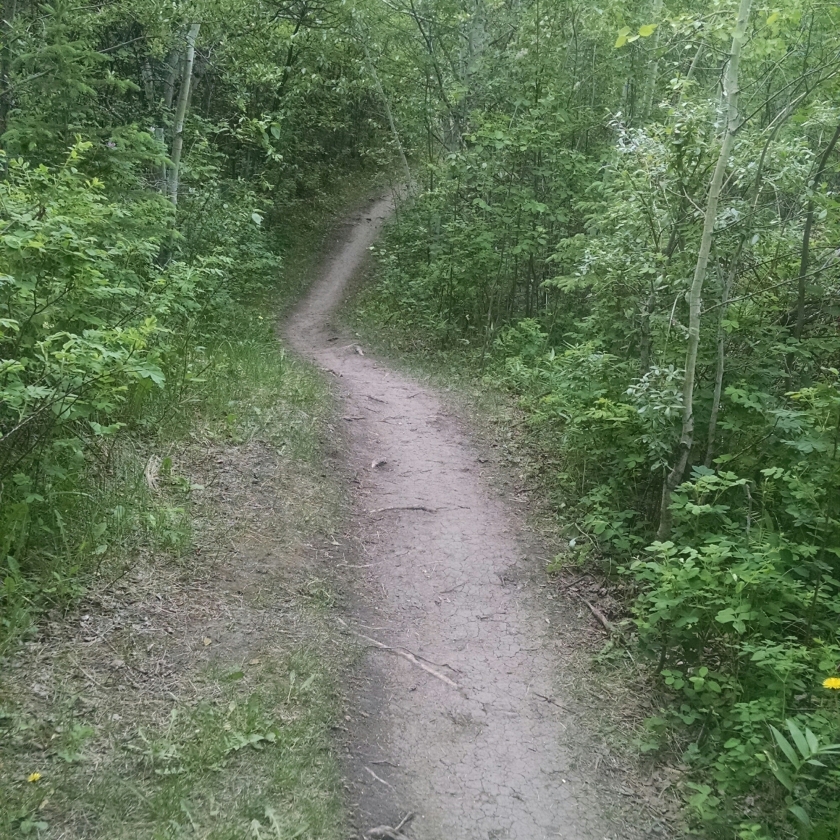 Powderface Ridge in Kananaskis, Alberta is a tough slog both up and down but the top has amazing views

I had heard a lot about this trail, researched this trail, and downloaded off-line maps for it for my GPS and static maps in case that failed. Turns out, I should have gone one step further and taken someone along who knew the correct route.

It is on the edge of the Rockies and the top has an amazing view of the peaks in the distance.

The 8 km up is relentless. It has 700m vertical of rocky trails of mostly even grade. There was virtually no running this trail. It was mostly a fast hike to the top.

I had planned to run on the way down, so I could make up time. In my misguided wisdom, I thought I would hike up the one side, down the other side, back up the other side and and then downhill all the way back to the car.

I got to the top, ooh-ed and awe-d, and then started on the way down the other side. However, I must have immediately lost the trail. What I was following looked like a trail, and followed the rock cairns along the top and was going in the right direction. Evidently other people must have taken this trail too, but had obviously judged the error of their ways and corrected before I noticed my error. 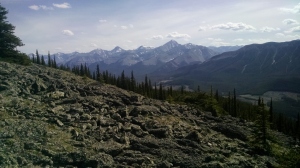 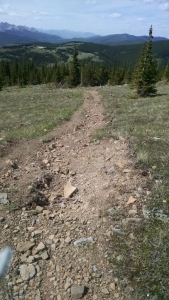 On the way down, when I checked on my GPS 500m after the top, it showed the official trail was 100m to the east, fortunately going the same direction as I was. However, it was down a steep cliff from where I was. And that cliff continued for another 500m (forward and back). I never was able to get over to the trail. So I ended up picking my way down the mountain through the trees making my own trail. Not so smart since it took me an hour to go 2 km to the highway at 30%+ grades. At the bottom I was only 200m from the trailhead I had wanted to go down.

But I had lost too much time and had to find a quicker way home. So instead of going back up and over the mountain, having briefly contemplated hitch-hiking, I ran the 9km along the highway back to my car.

Next time I’ll know the trail a lot better. But the fun is in the adventure, right?