Now that was hardly what you would call a hill. More like a mountain. When you need to hike 80% of the uphill for 700m vertical in 6km it is a pretty serious climb in my books.

But we had a blast. The trail was dry at the bottom but near the top I turned around when I started post holing in 2 feet of fresh powder. The trail had abruptly ended when the people in front of me who were packing the snow trail had obviously turned around in frustration too and had left me with no tracks to follow. But I was within 200m of the top – so frustrating. It would have taken another 45 minutes in that kind of snow. There will be a next time.

Going down was fun though. It is a very rocky and had lot of roots so there was no easing off on the vigilance. But no scrapes and bruises this time around.

Cox Hill in Kananaskis, Alberta. One of the gentler mountain climbs, so they call it a hill. What were they thinking?

So, where are we going? How much are those contour intervals anyway? 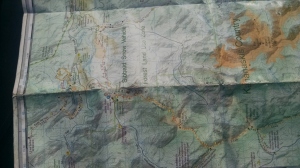 Need pictures of the maps so we can find our way back. 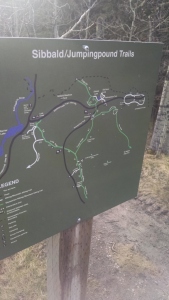 The bridge was recently replaced. Looks pretty solid, but the water is rising.

The trail looks amazing, so far. It is relentlessly uphill, but looks beautiful.

A little snow? No problem. 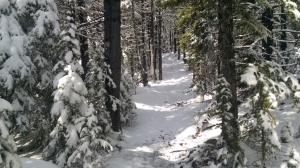 Where did Spring go?

The trail thins out near the top of the world – 700m up. Sun is still shining though.

Top of the world, wow! That’s the Canadian Rockies for ya!

That’s May long weekend for you in Alberta. You never know what weather you’ll get.